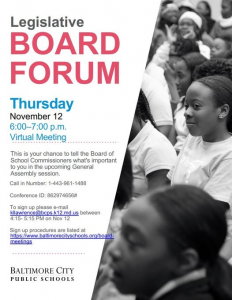 SPEAK AT THE BCPSS LEGISLATIVE BOARD FORUM ON THURSDAY, NOV 12th, 6-7pm

The School Board is holding a Legislative Forum this week. Like other forums, this is a chance for the public to make unlimited comments to the Board to try to inform future actions. Every year the district reveals their legislative platform (see last year’s in the links below), and then regularly cites the forum as the venue during which they could be influenced to take various positions. There are many important legislative initiatives that will be considered in January by the Maryland General Assembly, from much needed support and aide to address the pandemic to overturning the veto of the Blueprint for Maryland’s Future to closing the Digital Divide.
We urge members to make a public comment at the forum advocating for the district to take bold positions that support students and educators. BTU will be advocating for similar measures, and pressing the School Board to depart from some key positions promoted by the Maryland Association of Boards of Education (MABE), of which City Schools is a member. In particular, BTU wants to highlight two important issues that directly factor into the health and safety of anyone in Baltimore’s schools: mold in buildings and lead in water.
While you won’t find mold or lead mentioned in the district’s legislative platform, one of the representatives of City Schools in Annapolis, MABE, regularly lobbies against improved health and safety measures for our schools, and specifically argued against increased mold inspections and lower lead rates in school water fountains during the 2020 legislative session. During these bill hearings, individual school systems can have their own lobbyists participate, sometimes disagreeing with MABE, as Montgomery County did regarding stronger lead in school water protections.
BTU anticipates both mold and lead bills will be reintroduced in 2021. Here is a summary of what they do:
School Mold Inspections: would require periodic inspections for the presence of mold hazards and mold or moisture problems in each occupied public or nonpublic school facility in the State and to report on the annual findings.
Reducing Lead in School Water: Requires additional lead testing in school water sources and reduces the amount of acceptable lead from 20 parts per billion to 5 parts per billion; and requires a school to take certain actions to fix violations.
If you’ve worked in any of Baltimore City’s older buildings, you’ve seen mold in classrooms and bathrooms, and if you’re asthmatic or have taught asthmatic students, you’ve seen its negative effects.
Regarding lead, there is no level that is considered safe, and many states have long departed from the unscientific 20 ppb standard created by the federal government years ago which was based on the biology of an adult male. Lead is a neurotoxin that significantly impairs cognitive development and executive function in children. Students aren’t the only ones at risk as pregnant mothers are particularly vulnerable to passing lead contaminated water on to their unborn child.
For City Schools, the vast majority of us work in schools where water fountains have been turned off for over a decade due to astoundingly high rates of lead. Under existing law, schools need to test for elevated levels using the 20 ppb standard, and can apply for an exemption if a facility solely uses bottled water. Baltimore City has been able to apply for these waivers for the vast majority of its schools, but in the most recent year that we have data, nine City Schools facilities were tested and over 15 samples had elevated use. If the state were to require the proposed lower number, many more working water sources would be in violation in our schools.
BCPSS did not take a public position on either of these laws last year, but MABE strongly argued against both. Montgomery Counties and others, however, supported these bills or indicated they would support the bills if certain amendments were adopted. We want BCPSS to be a vocal supporter as well, and use its influence within MABE to try to change the organization’s stance (last year, BCPSS Board Commissioner Martha James Hassan was the President of MABE, and this year Board Chair Linda Chinnia sits on MABE as the City Schools representative.
During the pandemic, City Schools leaders have repeatedly said they prioritize the safety and health of our students, while at the same time making hasty decisions with incomplete plans, all while COVID transmission rates skyrocket. Not supporting stronger mold and lead protections highlights the district’s misplaced priorities. Please consider making a statement on these items or any others.
If you want support from the BTU Legislative Committee on making a 2 minute public comment (3 minutes maximum), please fill out this google form: https://docs.google.com/forms/d/e/1FAIpQLSeQT9aXEK3ByyVPxzQJPKHz73jkyl5cH33z9zWF18q1-pPbeg/viewform
Much more can be read on all of these items:
BCPSS 2020 Legislative Platform: http://go.boarddocs.com/mabe/bcpss/Board.nsf/goto?open&id=BJJSXU74DE02
Lead Testing Results in Schools:  https://mde.maryland.gov/programs/Water/water_supply/Pages/Testing-For-Lead-In-Drinking-Water-Public-and-Nonpublic-Schools.aspx
Safe School Drinking Water Act: http://mgaleg.maryland.gov/mgawebsite/Legislation/Details/SB0992?ys=2020RS
MABE on lead: https://www.mabe.org/wp-content/uploads/2020/02/SB-992.Lead-Level-to-5ppb.pdf
Inspections for Mold in Schools Act: http://mgaleg.maryland.gov/mgawebsite/Legislation/Details/HB0007?ys=2020RS
MABE on mold: https://www.mabe.org/wp-content/uploads/2020/02/HB-7.Mold-testing-and-remediation.pdf
Sign-up procedures: https://www.baltimorecityschools.org/board-meetings
To sign-up, between 4:15 – 5:15 PM on Nov 12, please email: kllawrence@bcps.k12.md.us