Attend the General Membership Meeting to cast your vote and get involved. 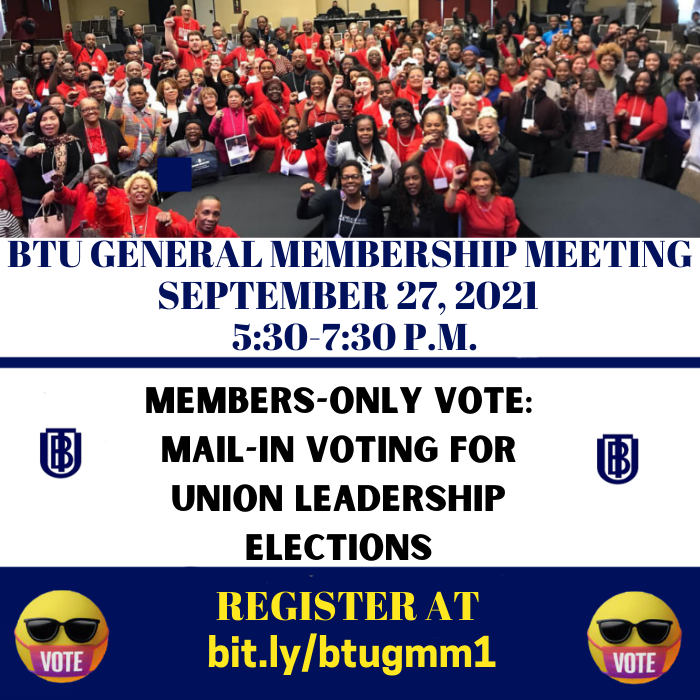 The Sept 27th General Membership Meeting will be a virtual webinar where folks cast their vote on two pivotal issues. Please register so your membership can be checked by Marisha Ingram, Membership Associate, and you will be sent the Zoom link so you can join the webinar. The email will be from “BTU Admin #2”. Check your spam folder!

DEADLINE FOR REGISTERING FOR THIS WEBINAR IS SEPT 26TH AT 11:59PM.
NO REGISTRATIONS AFTER THIS DATE/TIME WILL BE CHECKED.

Why is there a Constitutional Amendment?

What constitutional amendment did the BTU Executive Board approve?

n. BTU will provide for a mail in ballot option on request as well as multiple in person voting locations.

Requests for mail in ballots shall be made to the Chapter’s Secretary not less than ten (10) days prior to the date set for the election and shall contain the grounds therefore. Mail in ballots shall be valid only if they are received by noon of the day on which the polls close. Mail in voting shall be conducted with all proper safeguards for the secrecy of the ballot.

(To see this complete proposed amendment, along with the language that is proposed for removal, see the bottom of this email.)

What happens after the constitutional amendment was approved by the Executive Board?

How do members attend the September 27 General Membership Meeting?

How will members vote at the September 27 General Membership Meeting?

The proposed Constitutional Amendment that will be voted on:

Bold and Underlined = new language to the Constitution

= to be removed from the Constitution

a. The elections for President, Chapter officers and Chapter Executive Board members shall be in May of every third year. The term of office shall be for three (3) years. Elections shall be no less than thirty (30) days after the final date for submission of nomination petitions.

b. Not less than fifteen days prior to the election specific notice of date, time and place or places of the elections, offices to be filled, and names of candidates shall be mailed to each union member at his last known address. Additionally, such notice may be prominently made in a regular publication to the union membership. Election may be by a slate vote but candidates may run individually. The President of this organization shall, upon election to office, be a delegate to the American Federation of Teachers and AFT Maryland.

c. No member shall use the Union Hall or any of its facilities for the purpose of electioneering.

d. Upon reasonable request of any bona fide candidate for office, the Chapter’s Secretary shall arrange for the distribution of any campaign literature by mail, or otherwise provide that such candidate pays the reasonably estimated cost involved in advance. The Secretary may require that all campaign literature shall be presented to him at the principal office of the Chapter not later than seven (7) days prior to the date of the election and may, where in his judgment it appears necessary, provide for a consolidation of such distribution in which case the cost of such distribution shall be assessed upon the candidates involved on a pro rata basis.

f. The Chapter’s Secretary shall retain copies of all requests for distribution for campaign literature and copies thereof, shall make a record of the date the literature was distributed, the cost thereof and the amount received thereof, and shall also retain a copy of the notices of nominations and of the election, a copy of the ballot, the official tally sheet submitted by the tellers, all ballots and such other records including election rules as shall relate to the conduct of the election. All copies and records shall be retained for one year.

g. Voting shall be conducted by secret ballot among the members of each Chapter in good standing. There shall be no proxy voting.

i. Each candidate shall receive from the Chapter’s Secretary an accounting of the votes for his office as soon as the results are known.

j. The candidate for each office who receives a plurality of the votes cast for the office shall be elected thereto. Newly elected officers take office immediately.

k. If any nominee should die before the election, his name shall nevertheless appear on the ballot. In the event such name shall receive the requisite number of votes to be elected, the office shall then be filled in the same manner as vacancies are filled when they occur during a term of office as provided in this Constitution.

l. Each candidate, at his own expense, shall have the right to have an observer, other than himself, at each polling place and at the counting of the ballots who must be a member in good standing of the Chapter.

n. The Chapters’ Executive Boards, sitting jointly, shall have the authority to establish all rules and regulations for the conduct of the election to supplement the provisions of this Constitution, including the authority to use mail referendum balloting or absentee balloting, without membership approval provided. BTU will provide for a mail in ballot option on request as well as multiple in person voting locations.  Requests for mail in ballots shall be made to the Chapter’s Secretary not less than ten (10) days prior to the date set for the election and shall contain the grounds therefore.  Mail in ballots shall be valid only if they are received by noon of the day on which the polls close.  Mail in voting shall be conducted with all proper safeguards for the secrecy of the ballot.