“A coalition of Baltimore youth advocates and City Council members is calling on Comcast to expand internet access available to the city’s low-income residents, saying during 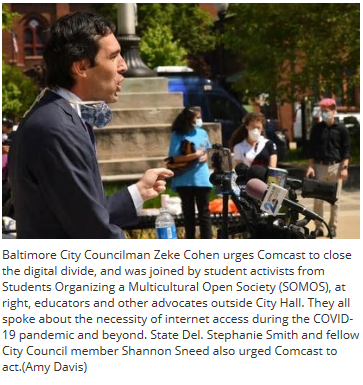 a news conference Tuesday that the internet has become a public utility for children trying to learn during the coronavirus pandemic.

Led by Students Organizing a Multicultural & Open Society, or SOMOS, the group is calling on Comcast to extend its free offering of its Internet Essentials service, a reduced-bandwidth version of internet service available to lower income residents at a discounted monthly price.

At the news conference, Councilman Zeke Cohen said “the reality is that we live in a city where the internet has been red-lined.”

He said that areas without common internet access mirror those regions in the city that were denied loans by banks before the Civil Rights era because they were predominantly black neighborhoods.’We live in a nation where we treat the internet like a luxury instead of a public need, Cohen said.'”