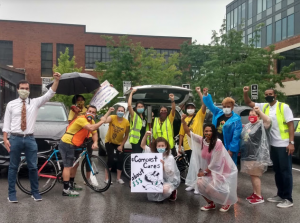 My name is Franca Muller Paz, I am a Building Representative for the Baltimore Teachers Union, an Advisor for SOMOS Students Organizing a Multicultural and Open Society, and a Teacher at Baltimore City College.

Since this pandemic began, our school district has been at the mercy of the goodwill of Comcast, a company whose functional high-speed service is out of reach for many of our families and staff and whose “internet essentials” program for low-income families falls far short of the service they need for a 21st century education.

Yet, despite the advocacy of students, teachers, educational advocates, politicians, and the school district, Comcast routinely comes up short for our kids.

As the 3rd wave of COVID rises, it is clear distance learning and its impact on education as we know it, will be with us for the foreseeable future. And The need for internet speed that we have today will not disappear even after the storm of COVID has passed.

Instead of waiting for a multinational, multibillion-dollar company to do the right thing, we must work together to find another way to get all Baltimoreans online. The first step in this solution? Joining the Maryland Association of Counties in supporting the “Broadband Accessibility Act of 2021.”

This year, the Maryland Association of Counties has taken up Broadband as one of the Association’s four priorities for the 2021 Maryland General Assembly Session.

This act will ensure rural and urban areas alike, like Baltimore City, receive needed resources to build out high-speed broadband access for our city’s students and their families.

To this day, our City is the victim of digital redlining. From Sandtown to Cherry Hill and beyond, there are areas of our City that internet service providers, like Comcast, have determined it is not worth their investment to build out functional internet infrastructure.

That is why, I am asking that Baltimore City Schools be champions in advocating for our youth and push the Maryland General Assembly to step up for our kids – where these private for-profit companies have fallen desperately short.

Baltimore residents today face a comparable challenge to what rural Americans faced a century ago. In the 1930s, millions across rural America lived without electricity, a lack of infrastructure that hurt both people, education, and the economy.

In response to inaction from private power utilities that falsely claimed extending coverage would be unprofitable for them (sound familiar) an activist government and mobilized communities stepped up. The Rural Electrification Administration under President Franklin D. Roosevelt brought light, power and a place in the 20th-century economy to the rural United States.

In the past, rural children struggled to do homework without electricity. Today, inadequate internet access, slow speeds and high costs stand in the way of a child’s right to an education. This is especially true in Baltimore’s Black and Latinx households, where less than half of families are connected to broadband internet.

Two decades into the 21st century, our kids and communities still struggle to access the internet, a basic necessity and a human right as defined by the United Nations. If we do not solve this problem, we face an educational deficit that will affect our city’s children for years to come.