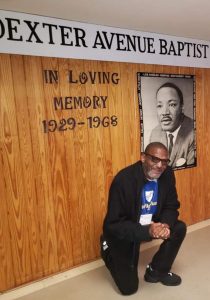 Larry Gaines shines as an employee of Baltimore City Public Schools for 20+ years devoting his brilliance to a few areas of the system. Larry finds that the most rewarding part of his experience is supporting children with disabilities in areas ranging from classroom instruction to supporting preparation for the Special Olympics.

Larry has labored as a community advocate for most of his life. His dedication has been shown from working in political campaigns with the Mitchell family and many other leaders in West Baltimore to serving as the PTA President of the Robert Coleman Elementary School.

A lifelong caregiver, Larry was always involved with parent groups where his children attended school. During his time at Robert Coleman ES, Larry worked closely with then- Principal Brenda Allen, to build a playground for families in the community. During his tenure as the Parent & Community Advisory Board (PCAB) Chair, Larry worked with a multitude of organizations to address the crisis of dangerous levels of lead pouring from Baltimore City Public Schools System’s faucets and fountains. He continues the fight for safe and equitable schools and facilities today as the esteemed treasurer of the PSRP Committee.