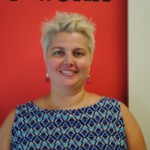 After completing her Bachelor’s Degree in Political Science at Notre Dame of Maryland University, she moved overseas and taught English at a private school in Germany. “I really loved teaching,” Sarah said of her experience in Germany. She later received another degree in International Relations from Tampere – Finland. It was at that point she decided to join BCTR and become a teacher.

Sarah has been a union member for her entire career. Her mother was a union bus driver while she was growing up and when Sarah got to Arlington she was excited to become the BR there. “Since I have a background in Political Science, I have seen how important unions are to the U.S.,” Sarah said. She said it is because of union that the Middle Class has been able to stay so strong and active in America.

“One thing I’ve noticed, is that younger people don’t know the importance of unions, they haven’t done the research and no one has taught them,” Sarah said.

It was for this reason Sarah decided to run for the BTU Executive Board. She said Ms. English approached her last winter and she decided to run. In May she was elected as an Elementary School Vice-President. She also hopes to become a member of the BTU Grievance Committee.

“I hoping to support the new contract that will be coming out,” Sarah said. “I also want to see more transparency and do what I can on the Grievance Committee.”