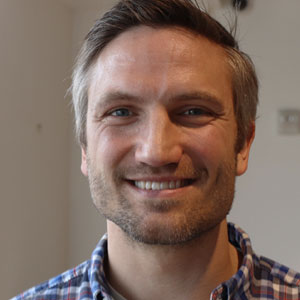 Zach Taylor is a teacher who is currently on external assignment for BTU. Prior to this new role, he has taught social studies, English Language Arts and ESOL, all at the middle school level. Zach has worked at Calverton, Civitas, and most recently, Commodore John Rodgers, where he taught from 2012 to 2019.

Unsurprisingly, no longer working with students on a daily basis has been the biggest drawback of working at the BTU full time. I do not miss the endless grading, paperwork, or proctoring standardized tests.

Why did you decide to run for leadership in the union?

As part of a group of Building Reps and community activists, I saw the power and potential of active union engagement. Whether fighting for fair treatment from school administrators, battling North Ave for the structures and resources needed to do our jobs well, or pressing our local and state government for greater funds, I participated in a number of coalitions that successfully made progress on all fronts. With a deep-seated belief that the membership of the BTU is the union, I also saw that exercising power doesn’t occur spontaneously; it needs to be cultivated, leaders in every school need to be supported, and stronger ties need to be made with the communities surrounding our schools. Combining this with ideals of social and racial justice, transparency, and accountability, I ran for union leadership to further build union power and defend public education in Baltimore City at a time when it’s been under a sustained attack by a national reform movement that has targeted educators, undermined school communities, and deprived students of what they deserve.

Days vary quite a bit, but most contain at least a few hours of emails and phone calls with members, and several meetings with BTU staff, North Ave, and BTU members – either through various committees or in preparation for negotiations. A good day allows for research to assist in negotiations, school policies, legislation, or meetings with community groups or public officials. The best part of most days is being able to meet and work with BTU members who work throughout the school system. There is so much talent and dedication to public education within BTU, it’s inspiring and motivating to work harder to support everyone’s efforts.

Thousands of BTU members rely on you for information that affects their jobs and their lives. Where do YOU get your information from? How do you stay on top of all the latest developments at a chaotic time like this?

Almost without exception, the best place to get information and ideas is from members. The BTU Teacher and PSRP chapters have over 150 job titles, and even when members have the same job title, they often have wildly different experiences in a system like BCPSS’s that embraces principal autonomy. Teachers and PSRPs who are confronting the difficulties of working in BCPSS often learn of changes or foresee issues long before they become district wide, so regular, one to one contact with members across the system is crucial to the union running well.

On a more logistical level, we get information from as many sources as possible. We monitor every policy development from BCPSS and the State Board of Education, as well as following, and often influencing, action in the Maryland General Assembly. We don’t just read the legislative updates from public officials or the email newsletters from our brothers and sisters in other unions, we have regular meetings with elected offices and union leaders across the state and in other cities to learn about new initiatives and share ideas.

Members are often frustrated when the union’s hands seem to be tied by state laws or other restrictions that limit what tactics the union can use and what the District is required to negotiate on. What would you say to BTU members who feel disempowered?

The legal playing field is definitely tilted against educators and our unions, but our experiences throughout the pandemic have shown a way forward. Through solidarity and mass participation, we’re able to exercise power to secure more protections and resources than would have been otherwise possible. While contracts are fundamental to a union’s operations, our power goes beyond written agreements. Through working in coalition with parent organizations and community partners, we’re able to change media narratives and exert more pressure on district leaders who previously received deferential treatment. We can overcome disempowering legal structures by continuing to raise our voices, developing our collective leadership, and exercising mass participation.

Even with the deck stacked against us, widescale union participation has brought more safety to every single level of the district’s plans. Though we haven’t won everything we need, the district’s original intent was for tens of thousands of students and staff to return in the late fall, while ventilation, testing, accommodations, and countless other safety measures were either insufficient or altogether absent. Basic safety shouldn’t be negotiation or a privilege, but under the current school leadership it is. The safety in our current plan exists because of the safety measures BTU fought for. Mass participation brings progress; when we show up and fight, we can win improvements for all students and staff.

Where do you envision BTU in 5 years?

While this has been an exceptionally difficult year for everyone, I’m excited about the future and continued growth of BTU’s power. During the pandemic, members at every school have raised their voices and challenged out-of-touch policies that hurt staff and students. There’s no going back. We need to sustain and grow this level of critical engagement in all we do – at the bargaining table, at policy meetings, at school sites, and so on. BCPSS management thrives by isolating schools and staff from one another, but members are not alone. Union participation, leadership skills, connections, and ambitions are multiplying every week and it’s invigorating to be part of a movement that raises expectations on BCPSS and the City of Baltimore for what’s acceptable.