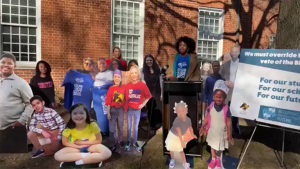 On February 12th, the Maryland State Senate overturned Governor Hogan’s veto of the Blueprint for Maryland’s Future – the Kirwan Commission legislation, making the Blueprint a law. For Baltimore City Public Schools, this will reverse decades of inadequate, regressive, and discriminatory education funding and policy. Overturning the veto allows for some of the most comprehensive, progressive, and socially transformative public education reforms ever attempted in the United States to become law in Maryland. Over the last twenty years, more than 3.2 billion dollars of educational funding never reached Baltimore City Public Schools even though the state constitution and the courts mandated it. The new law will address this problem.

The Blueprint for Maryland’s Future was written based on many of the recommendations proposed by the Commission on Innovation and Excellence in Education to make Maryland’s school system amongst the best in the world. The commission, chaired by Dr. William “Brit” Kirwan, had 25 people, including our very own Baltimore Teachers Union member and dedicated special educator, Morgan Showalter. The Kirwan commission was tasked with the ambitious charge to overhaul our state’s education policy to place Maryland amongst the top of international high performing school systems while also addressing the deficits in the current funding formula.

For educators in Baltimore, the Blueprint will bring about many changes, some of which have already begun, with others being phased in over the next decade. We have already seen the increase in community schools through concentration of poverty grants, which fund community school site specialists and health services providers to support students’ and families’ needs when schoolwide poverty levels reach 55 percent. In Baltimore City, this means that almost all high schools are eligible to become community schools. There will be changes in how teachers are trained and credentialed as well as a new career ladder structure. Teacher salaries will now align with other professionals with similar education and responsibilities, with the statewide starting salary becoming $60,000. Recognizing that teachers’ schedules are rigid, the Blueprint aims to free up 40 % of teachers’ workdays for required breaks, collaborative planning, improving curriculum and instruction, and tutoring. Teachers will also have more significant opportunities to take on leadership roles and will no longer have to leave the classroom to have a broader impact on students. The new career pathway will contain two tracks: an administrative pathway, and a teacher development leadership path that culminates in a dual university and Pre-K-12 teaching position. Most importantly, equitable state funding, more resources for schools with concentrated poverty, and an emphasis on expanded Pre-K and Career and Technology Education (CTE) will accelerate education and life opportunities in Baltimore City.

While we’re very excited about the Kirwan implementation, we couldn’t secure all of the amendments we’d have liked. The current bill has three growth areas: we need to continue organizing around paraprofessional and school-related personnel (PSRP) pay raises, the Blueprint’s National Board Certification (NBC) career ladder, and finally, fair funding.

President Brown drafted an amendment to the Blueprint that recognized PSRPs’ essential contributions to schools by mandating a pay raise for them; however, it did not make it into the final version of the law. We will continue fighting for this necessary recognition and deserved compensation for our PSRPs.

Additionally, while the Blueprint elevates the teaching profession through increased teacher salaries, it dangerously centers National Board Certification (NBC) as the sole pathway of advancement to reach the top of the ladder. The Baltimore Teachers Union believes that NBC should be a significant part of the career ladder and financially incentivized; however, requiring people only to use NBC to reach the top tiers could damage the school district’s recruitment and retention efforts. BTU drafted an amendment to maintain the career ladder’s intended outcomes while allowing for a similarly rigorous alternative to NBC as determined by the Blueprint’s Accountability and Implementation Board. Luckily, we have time to develop a solution before the statewide career ladder is implemented in 2023.

Finally, we must keep up the fight for fair funding. The Maryland General Assembly took modest steps to modernize our tax code and generate additional revenue to meet critical needs. Still, the state hasn’t yet allocated sufficient income to fund the Blueprint’s reforms in their entirety. BTU worked inside the Fair Funding Coalition to ensure that the Blueprint was equitably financed. We must continue to fight to reverse our upside-down tax code, close corporate loopholes, and end ineffective tax breaks for businesses.

All BTU members should remain active because the work is far from done here. BTU leaders and members will provide opportunities for people to stay engaged and help organize around the Blueprint’s growth areas. In addition to addressing these, it’s imperative that educators also keep a vigilant eye to ensure that the state and city implement the Blueprint as intended in a timely and transparent manner.

We will fight full force for our PSRPs to get the much-needed pay raise that they deserve. We will also work to change NBC from being the sole, inequitable gatekeeper in the new career ladder, while also negotiating to grandfather in our teachers, many of whom have already achieved high placement in our Career Pathways. Lastly, we will continue fighting for fair funding. That’s the work that we’re planning to do along with BTU leadership; however, we need as many people as possible to advocate with us to achieve the most substantial results.

Morgan Showalter and Fareeha Waheed are educators, active BTU members, and advocates fighting for more equitable and just practices and policies in their classrooms and across Baltimore City. You can find Morgan nurturing his talents as an artist and Fareeha tending to her indoor apartment garden in their free time.