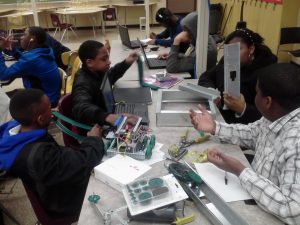 Just a few short years ago there was a major national push to expand Career Technology Education (CTE) in primary and secondary schools. Probably the only thing President Obama and President Trump did with equal enthusiasm is insist on businesses, LEA’s, and school districts supporting strong CTE programing in schools. While suffering the dramatic cuts of a global pandemic, companies around the world continue to express the need for skilled workers. It is in this time that our school district should be focusing on the expansion of our CTE programming.

However, late in 2020 North Avenue’s department of College and Career Readiness, formerly the Office of Career Technology Education, announced massive, sweeping changes to CTE programs across Baltimore City Schools. In response, as BTU’s Vice President of Vocational Education, I hosted a series of CTE Town Halls where CTE teachers engaged directly with the new Director of Career Readiness, Kumasi Vines, and his newly reorganized team of specialists. They promised to hear teachers out and that they would reflect on their recommendations to the board. As expected, his office moved forward with their ill-informed plans to cut and reduce programming.

Over and over again they continued to cite inaccurate and antiquated data from a report that utilized wage and placement data from 2016. In full disclosure, I would say that their efforts to reduce inefficiencies in the system are not only admirable but long overdue. However, their approach is a sledge hammer in a situation that requires precision.

We cannot argue with the fact that there are some programs that need to be updated and upgraded, but wiping the slate clean is beyond excessive. The impacts to schools are real, the impact to communities are major, but the impact to students will be devastating. The full proposed list of closures and program movements can be found here.

The full plan is something we can change but it requires effort. We cannot allow the discussion to become “They are going to do what they want anyway.” We have the ability to make meaningful input and change the outcomes. Bringing all of the stakeholders to the table is a major part of the first step.  On Thursday, February 11th, the BTU Executive Board voted to establish a committee for CTE Stakeholders. This committee will organize around pushing the district to make the right moves to grow our programs instead of cutting them. The committee will train and support teachers and community members to provide significant “push back” on the District’s CTE plan.

If you want to learn how to engage or lead the charge at your school or in your community, please click here and sign up to be a part of the new committee. Stay tuned for updates!