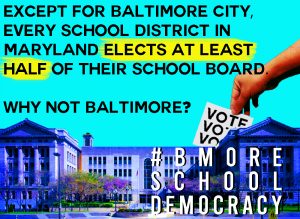 Millions of Marylanders voted in this past election, breaking same day registration records to select their representatives in local, state, and federal government. In Baltimore City, voters also approved checks on our strong mayor system by increasing the budgetary powers of the City Council. Yet Baltimore City residents did not cast a ballot for school board members, those with the power to vote on educational  policies – from grading to zoning to curriculum to school closures to the operating budget – that affect nearly 80,000 children and their families. School Board Commissioners also hire and evaluate the CEO, and negotiate contracts with BTU and other unions who work for the school system.

Every other Maryland jurisdiction has an elected school board: 19 are fully elected and 4 are an appointed/elected hybrid. Why not Baltimore City? Our student outcomes lag behind every other jurisdiction despite incremental progress under current leadership, and we cannot wait any longer for bold and decisive action. Rather than vote, Baltimore residents must rely on third parties to choose our board members via a largely closed, bureaucratic process. How many readers realize the process to recruit the next two appointed Baltimore City School Board members ended last year on November 25? Delegate Melissa Wells (D45) and Senator Charles Sydnor (D44b), recently submitted HB 1026 and SB 0906 to remedy this unjust and undemocratic situation.

The clear answer is a publicly funded hybrid school board that represents the people which it serves and ensures necessary areas of expertise are covered. This includes a student member with full voting rights, as is the case in Montgomery County, MD. We believe innovative ideas and honest perspectives come directly from young people attending our schools. Daily, they experience the opportunities and challenges of public education. Student voice should be counted and valued in all matters, not just the few currently allowed by statute.

While there is a plan to elect two members in November 2022, these members will be a limited democratic supplement to the current board, far less than what is guaranteed to all other families and communities throughout Maryland. We are asking for what other jurisdictions already have: a majority elected school board. Baltimore is no less deserving than other jurisdictions to exercise democracy and self-governance.

Not only is the school board undemocratic, but Baltimore City is one of just two jurisdictions, in one of the wealthiest states in the nation, where board members are not compensated. Serving on the school board is the equivalent of taking on an unpaid, part-time job. Regular meetings, often during the work day, are challenging for many workers and/or those with small children, limiting the pool of candidates to people with flexible schedules and more resources.

People should be fairly compensated for their time and the opportunity to serve should be accessible to all people, especially people with students in City Schools. By contrast, other large districts in Maryland and across the country pay their school board members up to $25,000 a year and student members receive substantial scholarships.

Another challenge the current wholly appointed Board presents is that the only regular interaction with the community is two public board meetings a month. In those meetings a maximum of ten people are heard for three minutes each. That’s right – formal public engagement is limited to a single hour a month during which Board members do not ask questions or engage with their stakeholders.

Each year that passes with a Board that only engages families and communities on their terms, and largely through surface level communication, is a missed opportunity to build on the strengths we offer. They miss the chance to hear our truths and expertise, having experienced the effects of their policies first-hand. We know that decisions made today will impact thousands of children for years to come.

Now more than ever, with our children at home–many who have no access to the technology and resources they need in the face of COVID-19–we are witnesses to how schools operate. We have thoughts and ideas, and a single hour of public testimony is not enough for us to have our voices heard. This is our City, these are our schools, and this should be our Board. We demand our voices be heard now! Only a majority elected school board ensures they will be, and we call on our Mayor, City Council and our delegation to the General Assembly to stand with us in support of this common sense reform.

Corey Gaber is a Vice President of BTU and chair of the Organizing Committee. To get involved in the campaign for an elected school board, email Corey at cgaber@baltu.org